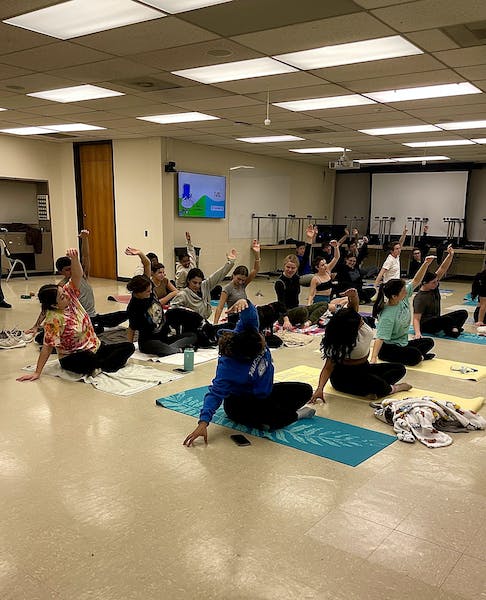 To help students relax after the off-season, the Student Activities Board (SAB) hosted a mixed-level yoga class with rescue puppies on Nov. 11.

The event was organized by Doggy Noses and Yoga Poses, a company that raises money and awareness for animal rescue groups by coordinating yoga classes with shelters. Students participated in a yoga class while puppies from One Step Closer Animal Rescue walked around and interacted with each participant.

“It’s a great stress reliever, especially right before Thanksgiving when everyone is like, ‘I need a break,'” Driesse said.

Isabella Rosario, a junior biology student, said attending the event allowed her to recover her sanity.

“Just to take my mind off it for a second and also just see some smiling dogs that just have that love,” Rosario said. “It’s nice to get some of that energy out and be around happy puppies too.”

Rosario said she also enjoyed the class because of the physical benefits.

“Honestly, we needed some kind of stress relief after the midterms, so it was nice,” Rosario said. “I also haven’t done yoga in a while, so I thought about stretching and doing those kinds of exercises, because that’s really fun.”

“There was a litter of puppies,” Rosario said. “It was super cute and it was super comforting to think that one day they would be adopted into a home.”

Rosario said spending time with the puppies reminded her of her pets back home.

“Not only was it a relief from stress, it was just really nice to see some dogs, especially since we’re away from home,” Rosario said. “We don’t get to see our own pets, so it’s nice to see that again and also to bring more awareness to the shelters in the area.”

Do you enjoy what you read? Get content from The Setonian delivered to your inbox

Reese Brancato, a computer science sophomore, said the event was “relaxing and different” from some of the other events offered at Seton Hall. He added that while he enjoyed the exercise, playing with the puppies was his favorite part.

“They randomly came up to you and let you pet them, and then I picked one up and didn’t let it go for a while,” Brancato said. “Because I was one of the few guys there, the instructors kept putting the dog on me. It was so cute.”

“I really appreciate the message of rescuing strays from shelters and considering adoption,” Brancato said. “I’m very supportive of that and I’d go to another event to support this again.”

“There are certain events we do that are much more about community than anything else,” Diaz said. “So I like that it has a good community aspect, because that’s something we try to cultivate on campus.”

Diaz said it’s “definitely going to be a recurring event”.

“It was great,” said Diaz. “I mean, everyone loved it. They thought the puppies were cute and they actually really liked the yoga class.”

Peyton Hruska can be reached at peyton.hruska@student.shu.edu.