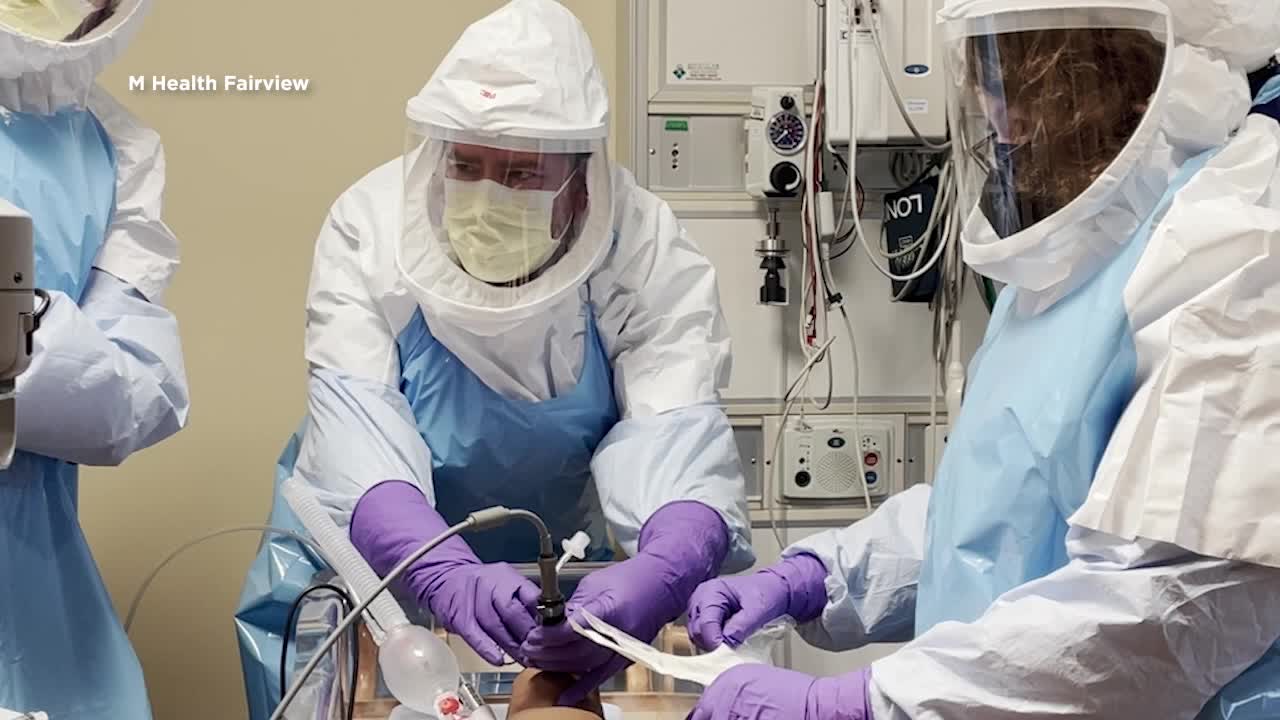 As the first Ebola vaccines are expected to arrive in Uganda, doctors at M Health Fairview University of Minnesota Medical Center are preparing for possible cases.

“That’s why we need to stay prepared and do these exercises regularly with our staff,” says Dr. Susan Kline, the medical director of the Special Pathogens Unit.

She gave 5 EYEWITNESS NEWS a rare glimpse into the quarterly training exercises she performs with a team of doctors. They practiced donning and doffing personal protective equipment, a critical protocol in a ward designed to treat patients with highly infectious diseases.

“For example, there may be Ebola on the floor. You want to make sure you take off those contaminated booties before you step into the clean aisle,” Kline said. “We are very careful about keeping infectious material in patient rooms.”

They also practiced placing a breathing tube on both adults and infants during a simulation in which a pregnant Ebola patient is admitted to hospital.

“To make sure we have enough dexterity, visualize it well enough with all the equipment on,” says Dr. Tate Gisslen, a neonatologist who recently joined the team. “Hearing is hard. It’s much hotter.”

He explained that patients also have an additional level of complexity.

“Knowing how contagious the disease is to everyone around, knowing that the patient is quite sick to begin with makes it a lot more challenging,” Gisslen said.

The unit was opened in 2014 in response to an Ebola outbreak that hit West Africa. It was announced in 2015 as a federally designated regional treatment center for Ebola and other specialty pathogens, with funding in 2016.

The medical center is one of only 13 federally designated locations nationwide.

Until this fall, it was the only location in a six-state region, including Minnesota, Wisconsin, Illinois, Michigan, Ohio, and Indiana. An additional site has now been funded in Michigan.

“We know the responsibility that comes with that,” Kline said. “We have to work to be prepared to care for Ebola or some other special pathogen or a new emerging pathogen that we are not aware of.”

The M Health Fairview University of Minnesota team brings together physicians with different specialties and different levels of experience.

During the last Ebola outbreak, they treated fewer than six patients under investigation for the disease, according to Kline.

“The current outbreak going on in Uganda right now is a lot smaller than the very large outbreak in West Africa, which had thousands of patients,” she said.

Yet they are willing to treat all patients who need care.

The unit has two high-level isolation rooms plus an adjoining 10-bed ICU. It also has its own sample processing laboratory, located across the hall from the patient rooms.

All rooms are equipped with negative airflow capabilities, which means that air from the patient room is filtered out so that it does not circulate in the hospital.

“We know that any type of patient can show up at our hospital,” Kline said. “We want to be prepared for all those different scenarios.”

The team has also been active in the response to the COVID-19 pandemic over the past two years. When the disease hit Minnesota in March 2020, her team helped establish Bethesda Hospital as a COVID facility. It was retrofitted with negative airflow technology, which is used with the Special Pathogens Unit. They also used their training during the pandemic.

Kline said they are continuing to train to be prepared for what’s to come.

“We want to make sure we can provide good patient care,” she says.