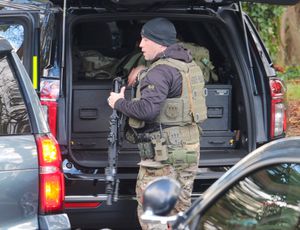 Three suspects are being sought who allegedly tied up bank employees during an armed robbery on Martha’s Vineyard on Thursday morning, according to law enforcement officials and a report.

Officers responding to a report of an armed robbery at the Rockland Trust in the Vineyard Haven-Edgartown Road area of ​​Tisbury around 9 a.m. learned that the bank had been robbed by a trio of armed suspects, Tisbury police said.

There is also a strong police presence off the island, in Falmouth.

Residents there were told by police they are looking for suspects in the Martha’s Vineyard robbery, according to Robert Goulston of Boston 25

The suspects, who were reportedly armed with small arms, tied up bank employees during the robbery before fleeing in a motor vehicle, the Vineyard Gazette reported.

Tisbury police chief Chris Habekost told the newspaper that no one was physically injured in the robbery. Lieutenant Bill Brigham confirmed to the news outlet that the suspects wore black hoodies and white masks and stole a bank teller’s vehicle.

Investigators have reportedly preserved the crime scene and are reviewing surveillance footage.

In a statement, Tisbury Police Department told Boston 25, “The investigation is still very active and dynamic at this time.”

Massachusetts State Police and the FBI assist Tisbury in the investigation.

This is an evolving story. Check back for updates as more information becomes available.