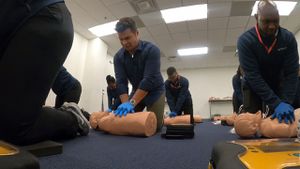 They are people many probably take for granted on vacations or business trips: flight attendants.

They are real superheroes ready to save lives in any situation.

Channel 2’s Jorge Estevez gained inside access to the Delta Air Lines training facility and was able to experience the intense training flight attendants go through to prepare for potential danger.

Delta has been training flight attendants in Atlanta since 1940 — more than 80 years of service in total.

Interns spend six weeks learning how to keep you safe while cruising at 35,000 feet.

Estevez quickly learned that there was more to the training than just putting customers at ease; it’s also about saving lives.

From turbulence to the rare chance of a crash, trainees learn how to evacuate, resuscitate and command aircraft to get passengers to safety.

“We make sure they feel comfortable in the moment if we ever need to evacuate an aircraft,” said Tyeisha George, Delta Air Lines technical facilitator.

“All the things you’ve described are important because in the air you’re in control,” Estevez told George.

“Us and the pilots,” George added.

The first test Estevez went through was dealing with a fire on board an airplane.

Estevez joined the rest of the interns as they sat in a fake plane with smoke billowing from one of the onboard bathrooms.

The trainer told Estevez to grab a fire extinguisher, and after constant communication, he quickly put out the fire.

“It’s pretty much the most dangerous situation you can face, especially when you’re in the air,” technical facilitator Jesse Penman told Estevez.

“When you talk about a fire, there is smoke. People are panicking,” Estevez told Penman.

“They will,” Penman said.

“So then it’s double work (for) everyone?” Estevez asked Penman.

Learning how to open every kind of door on Delta’s planes is another feature of the training.

There are 18 types of exits on eight different aircraft in Delta’s fleet. Estevez found that the doors are heavy and not the easiest to open.

And then there are the evacuations after an emergency landing.

The Delta trainers start the simulation with a typical flight. The students give the standard safety demonstration as they prepare for takeoff.

Once “airborne”, they encounter an emergency and must prepare for a rough landing.

You hear the trainers shout: “Bend over! Stay down!”

In the seats, the interns and Estevez act as passengers, bending forward in their seats so that their heads are almost between their knees.

Once they land, a trainee opens the plane door and others help the mock passengers board, where they must take the plunge down an inflatable slide.

One student after another goes down the slide – as does Estevez.

Everyone got out safely.

“It is as it should be. We try to make it as realistic as possible,” said George.

Estevez learned that repetition was key to making sure everyone made it.