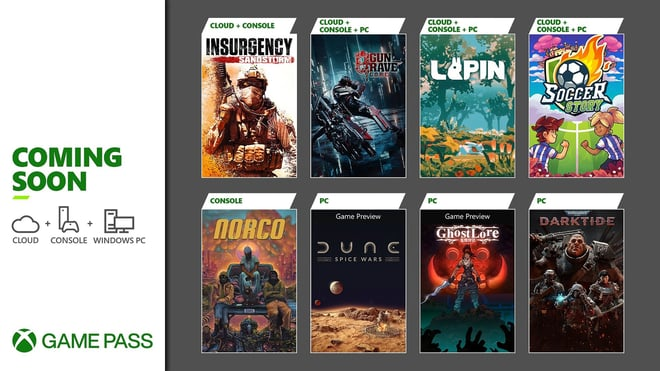 The second half of November will also be interesting for gamers with an active Game Pass. Microsoft will add eight more titles to the flat rate for games in the coming days. These include highlights such as Dune: Spice Wars, Warhammer 40,000: Darktide, and Insurgency: Sandstorm.

In recent weeks, Microsoft has already loaded the Xbox Game Pass with popular games from the worlds of The Walking Dead, Football Manager and Monkey Island. As known, the Redmond-based company is now tracking and announcing additional new recordings that will still be playable in November on the Xbox Series X/S, Xbox One, Windows PCs and via the cloud. The next batch contains eight games.

On November 17, the Game Preview of Dune: Spice Wars arrives on Xbox Game Pass, a new real-time strategy title from the creators of Northgard. At the same time, the Eastpunk RPG Ghostlore, the 2D platformer Lapin and the point & click adventure Norco will be available.

In the days that follow, third-person shooter Gungrave GORE, co-op shooter Insurgency: Sandstorm and family-friendly sports adventure Soccer Story launch. Finally, at the end of the month, the brutal action-shooter Warhammer 40,000: Darktide will be released.

In terms of DLCs, perks and game updates, Microsoft is announcing new content for The Elder Scrolls Online (Dark Heart of Skyrim) and Dead by Daylight (Forged in Fog), among others. Smartphone gamers can also look forward to 15 additional titles now playable with Xbox Touch Controls, including games from the Assassin’s Creed series, Disney Dreamlight Valley, and Amnesia. It is also pointed out once again that Vampire Survivors can now also be streamed via Microsoft’s cloud gaming.

As we know, a number of titles will leave Game Pass, including Archvale, Final Fantasy XIII-2, Mind Scanners, Deeeer Simulator, Undungeon and Warhammer 40,000 Battlesector. The deadline for this is November 30, 2022.