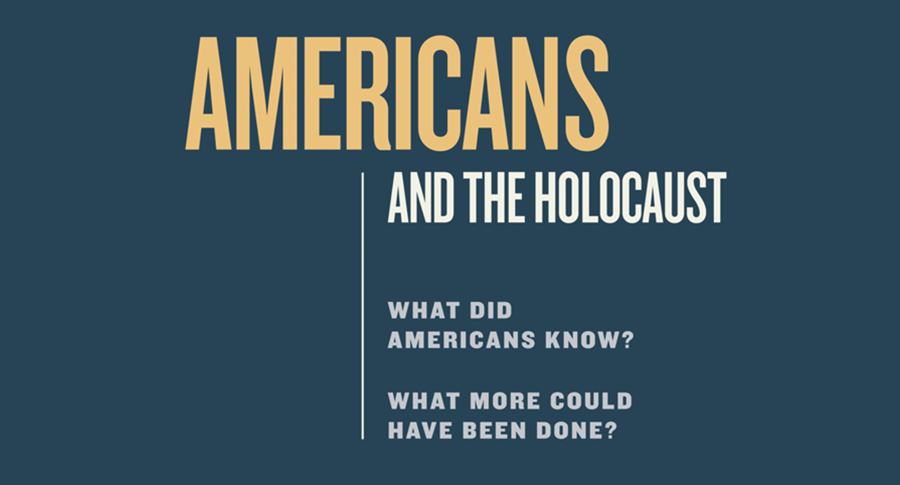 Mullins Library, the centerpiece of the University of Arkansas Libraries, is one of 50 U.S. libraries selected to Americans and the Holocaust, a traveling exhibit from the US Holocaust Memorial Museum that explores the motives, pressures, and fears that shaped Americans’ responses to Nazism, war, and genocide in Europe in the 1930s and 1940s. The traveling library exhibit — based on the special exhibit of the same name at the Holocaust Museum in Washington, D.C. — will travel to U.S. libraries from 2020 to 2022.

The public is invited Prelude to war: A film screening and discussion, scheduled for 7 p.m. Wednesday, November 16 at the Pryor Center in downtown Fayetteville Square. Frank Scheide, professor of communication, leads a screening and discussion of the film Prelude to war (1942), the first in the Why we fight film series produced by the United States government during World War II.

On Thursday, December 1, from 5:30 pm to 6:30 pm, the Mullins Library Hodges Reading Room will host a panel discussion with student and faculty speakers on how the Holocaust has impacted various disciplines. Jennifer Hoyer, associate professor of German and director of Jewish Studies, acts as moderator. Panelists include Greg Herman, associate professor of architecture; Amelia McGowan, assistant professor and director of the Immigration Clinic for the U of A School of Law; Kevin Simpson, chair of the Department of Psychology and professor of psychology at John Brown University; Toby Kline, Ph.D. candidate in public policy; and Mia Bingaman, a psychology major.

The exhibition’s final event is Through My Grandmother’s Eyes: The Veit Simon Family During the Holocaust, on Wednesday, December 7 at 6 p.m. at the Fayetteville Public Library. Courtney Doi will tell the story of her grandmother Judith Klein, the youngest of six children, who left Berlin, Germany, on the Kindertransport in December 1938 just after Kristallnacht. Klein’s father, grandmother, two aunts, and two of her siblings died in concentration camps. Klein died in 2016 and Doi inherited 30 years of her personal diaries. Doi’s presentation, featuring old family photos and first-hand accounts of her grandmother’s writings, explores both Klein’s journey from Germany as a teenage refugee and her extended family’s experiences across Europe during the war. In addition, Doi will discuss her own travels to Germany to better understand her family history and how we, as individuals, can work to prevent genocide in the future.

In addition to the traveling exhibition on loan, the University Libraries received a financial contribution to support these public programmes. The grant also covered a librarian’s participation in an orientation workshop at the Holocaust Memorial Museum.

Americans and the Holocaust: A Traveling Exhibition for Libraries is an educational initiative of the United States Holocaust Memorial Museum and the American Library Association.

Americans and the Holocaust was made possible through the generous support of main sponsor Jeannie & Jonathan Lavine. Additional large funding was provided by the Bildners – Joan & Allen z”l, Elisa Spungen & Rob, Nancy & Jim; and Jane and Daniel Och. The museum’s exhibits are also supported by the Lester Robbins and Sheila Johnson Robbins Traveling and Special Exhibitions Fund, founded in 1990.