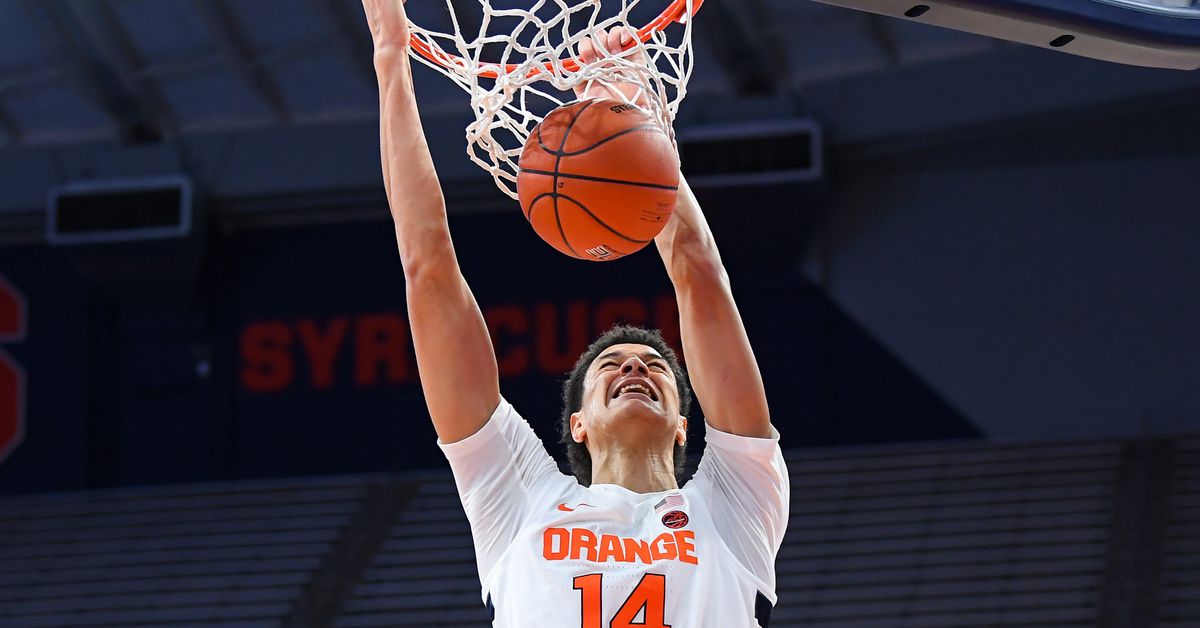 The Mountain Hawks drew first blood, but Jesse Edwards was quick to counter and land on a layup for the first SU points of the young season.

We’re used to seeing the offense go through Jesse, but unlike most of those nights, he was the 1st half top scorer. Instead of putting the guys on the outside, it was Edwards who kept finding himself with all sorts of space under the basket, and he was all too eager to please with five thunderous dunks. #14 would add 14 points in the first half and 18 overall, in addition to 11 rebounds. And the icing on the cake? Just one miss.

Both SU scorers had promising performances. Judah Mintz looked much more comfortable in 1 than he did in preseason. After sniffing an open stare at first, he started to land his next four shots. Unlike pre-season where Judah appeared to be very aggressive and wanted to take it all by himself, he was much more intentional with his selection of shots and the patience paid off. He finished 6/9 in FGs and totaled 16 points.

Joe Girard also got hot, especially from outside the arc. JGIII racked up 4/6 of three to the sound of a 19-point best team night. He was also a perfect 5/5 down the line and looked very relaxed in all of his FT attempts – something to keep an eye out for after he was so automatic in pre-season.

Symir Torrence led the secondary scoring with 10 points off the bench, including a deep three and a pair of spin-o-rama baskets: one jumper and the other layup. He also contributed six rebounds and three assists on the night.

Chris Bell was pulled out of the game in less than a minute, but Jim Boeheim allowed him back in the game, he ended up landing one of his two deep kicks. Justin Taylor got off to a rocky start, kicking 0/5 before finally hitting a jumper with about 5 minutes left in the game. Quadir Copeland followed up with his own jumper on his first career shot attempt, and he also made another shot in the closing seconds.

Benny Williams had a smooth day with just two points on five shots.

Mounir Hima is looking like a good pickup from the start, covering Jesse and showing off some much-needed physicality on the backend. At one point in the first half, he had a couple of burst jumping blocks on consecutive shot attempts.

Jon Bol Ajak even got involved with three final points. The only Orange player left off the scoresheet in the opening was Peter Carey.

A few minor complaints I have are with the current style of play. The mid-court offense generated plenty of counterattack opportunities, but it also gave Lehigh the same quality chances on the other side. If it weren’t for the size advantage of SU, they would probably be regretting these quick transitions more.

The man-to-man defense also looks a little suspicious at the moment, but it’s still very early in the season. I will reserve judgment on this for a few more weeks.

Orange is back at the Dome next Tuesday at 7 am to welcome rival in state Colgate. The Raiders broke their long losing streak against SU last season.