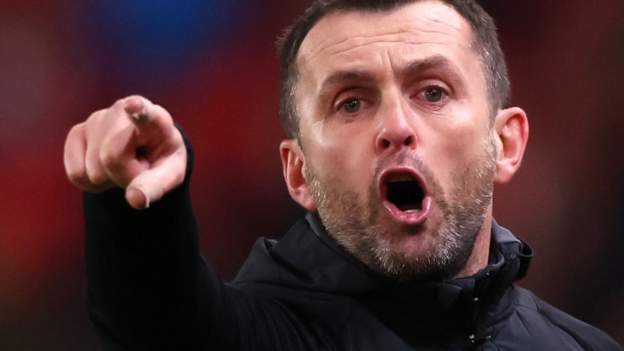 Luton Town lost to two early goals for Stoke City in what was potentially the final game of Nathan Jones’ second stint in charge of the Hatters.

Against a team he coached for nearly 10 months in 2019, Jones’ team conceded twice in the first 13 minutes – both goals coming from Morgan Fox’s left crosses.

Nick Powell was late in the area to head in the opening before Tom Lockyer, under pressure from Liam Delap, deflected into his own net.

Luton missed chances to respond, with forward Carlton Morris kicking straight into Potters goalkeeper Jack Bonham before the break and an unmarked Lockyer hitting the post eight yards after the break.

Stoke manager Alex Neil responded to Saturday’s home loss to Birmingham by making six changes to his starting lineup and his roster reshuffle had the desired effect, with the victory pushing the Potters into mid-table.

Among the signings was defender Harry Souttar, who made his debut as a starter for the Potters in 367 days after recovering from a serious knee injury sustained while on international duty with Australia.

Souttar was named in the Socceroos World Cup 26-man squad earlier on Tuesday.