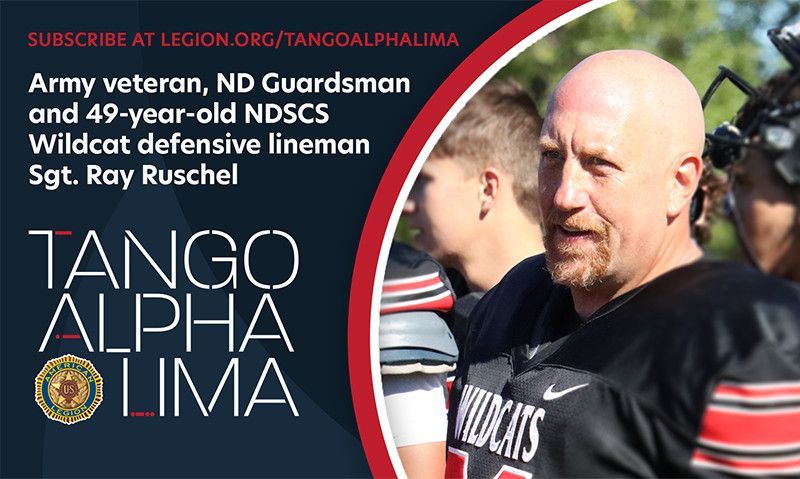 It is not uncommon for the military to have played football. Some veterans even followed the sport after service.

Ray Ruschel, however, is a different story. The 49-year-old North Dakota State College of Science (NDSCS) freshman returned to the field as a defensive lineman this fall after a 30-year absence.

The U.S. Army veteran and current member of the North Dakota National Guard joins the Tango Alpha Lima podcast this week as a special guest as part of a Veterans Day tribute. In addition to taking business classes at the NDSCS, playing football and his commitment to the Guard, he also works full time.

“It was definitely a challenge, trying to stay with these kids,” he recalled. “I’m older than most of their parents. These guys accepted me like I was one of them. It was tremendous.”

He is averaging one tackle per game for the North Dakota SCS (9-1). On Sunday, his team defeated Minnesota State, 19-0, to win the MCAC Division III Football Championship.

• Teamwork: He recalls that his unit has agreed to achieve a 100% pass rate on the Army’s physical fitness test. “After I made the decision to leave for football, they put even more pressure on me. And our team was the only one with 100% approval. It pushed me even further into football.”

• Transition: “It’s been a difficult experience, especially since I just got back from deployment. Getting blown away by the workforce again, and school and homework, football practice and gym sessions. Very little sleep.”

• Your role with the Guard. “It’s my job to shoot the bad things out of the sky.”

• Your favorite Avenger: The Hulk.

And don’t miss Ashley Gorbulja and her Leslie Knope plans for Veterans Day.

Check out this week’s podcast and the 150+ episodes of Tango Alpha Lima available in audio and video formats here. You can also download episodes from iTunes, Google Play or other major podcast hosting sites. The video version is available on the Legion’s YouTube channel.