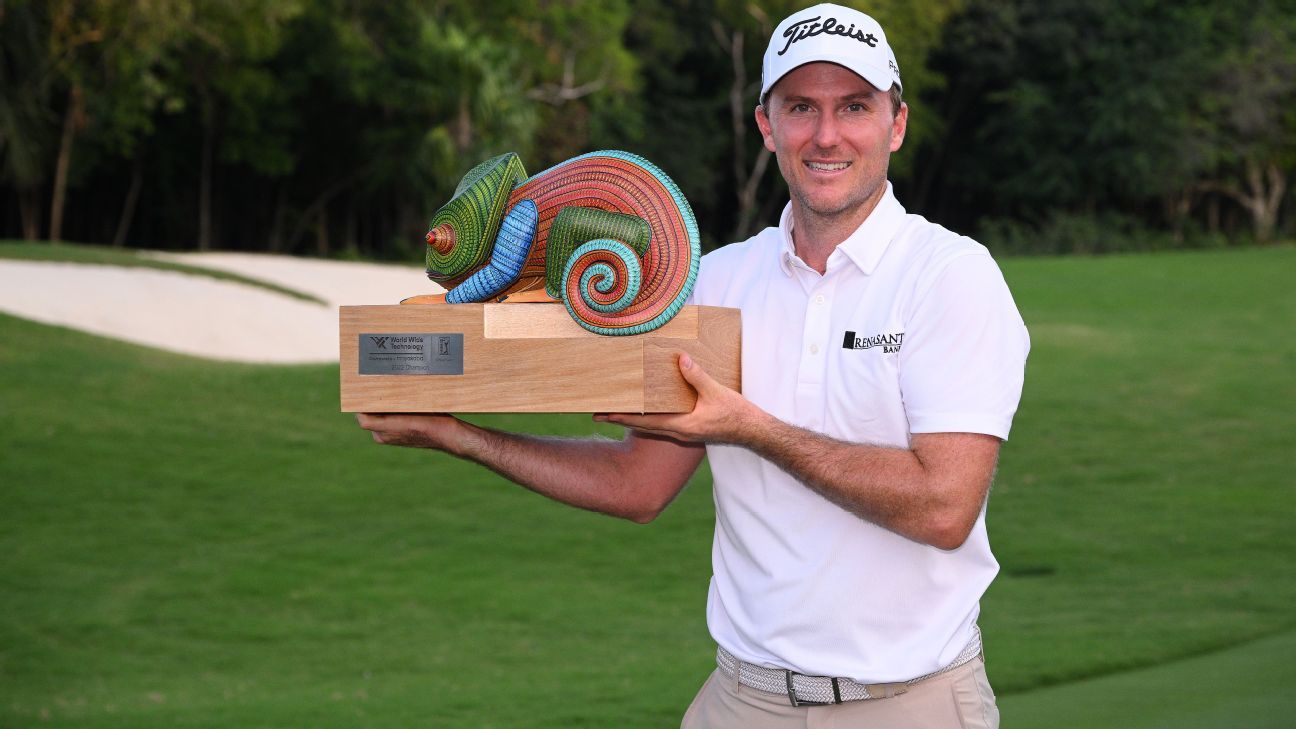 PLAYA DEL CARMEN, Mexico — Russell Henley finally bogeyed, and that’s all that went wrong for him on Sunday when he closed at 1-under 70 for a four-shot win at the World Tech Championship in Mayakoba.

Henley, with a six-stroke lead in the final round at El Camaleon, had his lead reduced to three when he missed a 5-foot putt on the fifth hole of the par 5.

He responded with three consecutive birdies, and no one came any closer than four shots the rest of the way.

Henley won for the fourth time on the PGA Tour and the first time since the Houston Open five years ago.

The previous five times, Henley had at least a part of the 54-hole lead, he failed to convert the win. The most recent was the Sony Open in January, when Hideki Matsuyama trailed two strokes and defeated him in the playoffs.

“I just tried to learn from my past and my mistakes,” Henley said with a smile. “All those events I didn’t close, they hurt. You never know if you’re going to win another one. Losing 18 with a four-shot lead was pretty cool.”

Henley finished 23 under 261 to tie the tournament record. He reached the final round as the only player who hadn’t bogeyed all week.

Brian Harman closed with 66 to finish alone in second, while the group five shots back included Masters champion Scottie Scheffler and Seamus Power of Ireland, coming off a win last week in Bermuda.

Scheffler has lost the No. 1 ranking he had held since March, when Rory McIlroy won the CJ Cup two weeks ago. Scheffler closed with 62 in Mayakoba, leaving him with a good chance of regaining the top spot next week at the Houston Open.

McIlroy is not playing again until the DP World Tour Championship in Dubai.

Power hit 68, and his third-place tie with Scheffler, Joel Dahmen, Troy Merritt and Will Gordon put the Irishman at the top of the FedEx Cup standings and moved him to 29th in the world, his highest ever ranking.

Henley has moved to number 33 in the world and is sure to return to the Masters. Last time, he didn’t secure a spot at the Augusta National until he broke into the top 50 a week before the Masters.

Henley missed three shots at the Wyndham Championship in 2021 and the CJ Cup at Shadow Creek in 2020. The other times he was tied or led by a shot or two, which isn’t much of an advantage on the PGA Tour.

This was a six-shot margin, and it’s rare that someone doesn’t win from there. It didn’t make things any easier.

“It’s hard. I don’t sleep well with the lead. I need a lot more practice,” said Henley. “I have no idea how Tiger did it 80 times. It’s hard for me to just calm down. You definitely don’t feel the same as when you’re practicing at home, but that’s the fun. Because we play.

“We want to see what we’re made of here and be tested under pressure.”

The win also sends Henley to Kapalua in January for the Sentry Tournament of Champions, the first elevated event in a new year of big purses.